For a motorcyclist simply identified as Abdulrasheed, he would have wished he never stepped out of his Gaa-Akanbi home on a fateful Monday 9th October, 2017.

On this day, he was returning home with his wife on the same motorcycle with him but

he ended up receiving matchete cuts on his nose after fight broke out between him and an unidentified member of commercial motorcyclists union.

This medium gathered that Abdulrasheed was hit with a cutlass twice by the member of the union following the refusal of the former to pay N50 as ticket fee.

The victim though a commercial motorcyclist was reportedly not operating nor putting on ‘Okada’ riders’ uniform when he was stopped at Gaa-Akanbi roundabout by the union member who in turn demanded to be paid N50 for his ticket for the day.

An eyewitness, Kunle Jimoh, who spoke with this medium at the Royal Care hospital, Gaa-Akanbi where the victim was rushed to, said, “Though Abdulrashhed was not in uniform, he could have explained that he was not on duty but he decided to pick up fight with those he cannot beat.

“He vehemently refused to pay and even picked up a cutlass at a shop nearby. When he raised the weapon up, he was overpowered by a member of the union who in turn hit his nose twice.

“In fact, Abdulrasheed would have been killed but for the intervention of his friend who deflected the machete from landing on his head.

Another colleague of the victim, who does not wish to be named blamed Abdulrasheed for picking up fight with the union members when he could have taken his time to make proper explanation.

“You cannot fight the boys, they are tout and they move around with charms. Fighting them is like preparing to die, we knew they are this deadly before we appointed them. In fact, the man who led them, his post in the union is called Olokada Police.”

When our reporter approached the victim on his sick bed, he declined comment but stated that once he is out of the hospital, he will report the incident to the police.

Effort to get reactions of members of the union proved abortive, as they had deserted the scene of the incident as at the time of filing this report. 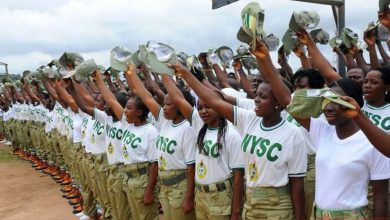