The Senate yesterday resolved to consider setting up a special funding for security agencies in the country.

The special funding will enable the agencies tackle the spate of killings, kidnapping as well as terrorism across the country.

The Senate President, Bukola Saraki disclosed this after the Senate resumed from a four-hour executive session with service chiefs.

The Senate had on May 8, summoned all service chiefs over the matter. The invitation was sequel to deliberations on a motion titled “Proliferation of dangerous firearms in Nigeria”, sponsored by Suleiman Hunkuyi (APC, Kaduna North).

Mr Hunkuyi had called for the invitation of the service chiefs while lamenting the incessant killings in several parts of the country especially the crisis in Kaduna.

Overtime, Birnin-Gwari in Kaduna State and some villages in Maru Local Government of Zamfara State have become targets for bandits.

Armed bandits have not only killed and kidnapped residents of the villages but destroyed properties too.

On Sunday, about 87 citizens were abducted along Birnin-Gwari Road in Kaduna State by armed bandits who ambushed over 15 vehicles conveying them.

In his motion, Mr Hunkuyi stressed that ”tribal, communal, religious, and other sectarian clashes, including the farmers/herders crises, are now more devastating due to wrongful and easy acquisition of firearms in violation of due process”.

He had expressed worry that despite the killings in Benue, Kaduna, Kogi, Zamfara and other parts of Nigeria, since the start of the year, no solution had been found.

He also expressed disappointment that the various departments of government entrusted with the responsibility of checking and regulating the influx of firearms in Nigeria “have failed woefully in the discharge of this all important duty”.

Upon resumption of plenary, Saraki read out the Senate’s resolutions.

He said bills which will help tackle the killings and insurgencies in the country will be passed even as he called for coordination among the security agencies.

“The Senate in a closed committee of the whole, received briefs from the Chief of Defence Staff, the Director General of the Department of State Security Services, representatives of the Comptroller-General of Immigration, Inspector-General of Police, Comptroller-General of Customs on the proliferation of dangerous arms, spate of killings and kidnappings by hoodlums across the country.

“Thereafter, they answered questions from the senators bordering security, insurgence, terrorism, kidnapping and other talks on national security matters.”

I killed my rival, sold his palm for N5,000 - Cultist confesses 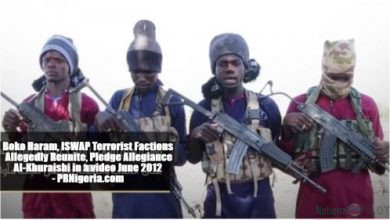