Our police have come again. First, it was to tell Nigerians benevolence that Senate President, Dr. Bukola Saraki and Governor Abdulfatah Ahmed were linked with the banks robbery at Offa which took place early this year. Both the dastardly incident, as well as the ludicrous argument seeking to link the two politicians with the crime, shocked Nigerians, to the marrow. All the banks combined in Offa, how much would there be in their strong rooms to attract endorsement by either Saraki or Ahmed.

Saraki was not just born with silver spoon in his mouth, but had good education and have worked and achieved a near pinnacle any politician can achieve. A minister, governor and not just a senator but Senate President, Federal Republic of Nigeria. Governor Ahmed was a successful banker and commissioner for seven years before he became a two-term governor of the state. Out of the over a hundred and twenty million Nigerians, how many have attained these heights for which the two men are grateful to Allah?

It was, therefore,  an allegation that sent shock waves across the spines of many, especially those family members, friends and associates who know the commitments of the duo towards getting our teaming youths out of vicious circle of unemployment. To empower the youths on a sustainable level, as a governor, Dr Ahmed has made available over N3b through Small and Medium Scale Enterprises scheme, established and devoted energy and resources towards making the International Vocational Training Enterprises College (IVTEC) an international model.  Various agriculture schemes have also been made accessible to the growing youth population in the state. Senate President Bukola Saraki has not only personally taken up educational responsibilities of a number of youths, provided employment opportunities for them, but has also evolved several youth empowerment programmes as a governor of the state.

To discerning public eyes, it was evident what the police was attempting to do for Saraki’s enemies what the enemies could not achieve in the court of law, or in the field of strategic political thinking. The police even had to threaten declaring Saraki and Ahmed wanted while the prime suspect in their custody, one Michael Adikwu, had, according to their own words, confessed to how the entire operation was planned and executed by him. While we thought the dust was sufficiently settled over the childish innuendo, the police staged what looked like their act one, scene two. In a drama-like script, we saw the police again coming out to lay siege on the official residence of the Senate President in an apparently but grossly disgraceful and miscalculated  attempt to stop Saraki from sitting at plenary with his colleagues some of whom that day had decided to dump the All Progressives Congress, APC.

How Saraki outsmart the police remains another classics in creativity, and points to the naivety of the police in matters of such nature. But would our men of the force learn? Instead of arresting criminals who invaded the hallowed chambers of the senate and carted away the mace, the legislative instrument of authority, our police would rather attempt to stop a political decision by lawmakers to move from one party to the other. And Nigeria is not a banana republic!

And now the police have come again. Six months after the Offa robbery, Nigerian have begun to ask questions about the next move of the police. Won’t the suspects be charged to court? What is preventing the police from doing this legal aspect of seeking justice for victims of the evil attack in Offa? Is six months not enough to file charges against the suspects, given that, according to the same police, these suspects had confessed to the crime?

No, our police said. The problem was with the Kwara state government which has refused to try the suspects. We, in the police are ready; we have completed our work and sent the files to the Attorney General of Kwara state but the state has not done anything. Those were the kind of words spoken by our police through our brother, who is their spokesman, Mr. Jimoh Moshood.

But is that the truth? The Kwara state Attorney General, Alhaji Kamaldeen Ajibade said the police just told a big lie. He said: “I see this as a cheap blackmail from the police and at this instance they have something to hide which they are yet to tell Nigerians about this case. I’m sure at the end of the day Nigerians will know what has transpired in this matter. That is why the police are now passing the bucks. They can now see that Nigerians have started asking questions that if you arrested suspects since April this year and they are yet to be charged to court; then there must be something about it. I urge Nigerians to ask questions about this matter.

“I want to confirm to you that a letter was written from the office of the Director of Public Prosecution of the Federation under the office of the Attorney General of the Federation. My office received the letter on August 27th this year. And the content of the letter had to do with the investigation report on the Offa robbery and directing my office to take up the prosecution of the matter. Immediately we received this letter, on the 6th of September this year, we wrote a letter through the office of the State Director of Public Prosecution to the office of the Attorney General requesting from them to provide for us the original case diary in the Offa robbery and also to transfer the suspects to the Kwara state police command. We waited for about three weeks and did not hear anything from them.

“I then took it upon myself to personally meet with the AIG Legal, one David Ogbodo, and requested that the original case diary be sent to Kwara to enable us start prosecution of the matter. I also requested him to send all the suspects to Kwara state and he told me that he had directed the man in charge, that is one Abba Kyari. We waited for another week; we could not get anything from them. So, I directed my DPP to liaise with the police this time around. He liaised with the police both in the state and also with Abbah Kyari. They promised every day that they would send the suspects to Kwara and the original case diary.

“You cannot prosecute under the law without having the original case diary. You cannot even file a charge without the case diary and in filing a charge you have to exhibit what we call proof of evidence. This proof of evidence entails the statements of witnesses. Statements of witnesses in this sense we are talking of the people that investigated Offa robbery. We don’t have all these with us. We don’t have the suspects on ground, we don’t have the witnesses on ground. How do you file the charge? How do you prosecute people you cannot see? I am surprised, particularly of the statement coming from the Police Spokesperson Jimoh Moshood. Moshood, without being personal,  is from Ilorin here. He has contacts and I am sure he follows up with events in the Kwara command and he knows too well that all the suspects are still with him at the police headquarters. Why will he now come to mislead the public that we are yet to prosecute? How can you prosecute people kept in Abuja in Kwara state High Courts? It is not possible.”

And if our police was telling the truth on this matter, why the sudden, back-door arraignment of five of the suspects a day after the alarm by Ajibade? Why bringing the suspects in the night? And where is Sunday Adikwu? Where is Kayode Opadokun? Why did the OC Legal in the case told the court he would need to inform the state DPP to do the proper arraignment of the suspects at the High Court? Our police are up to something again. May it be in the interest of our nation for which they are paid and to which they have sworn. May it not be to satisfy a politician, who, like all mortals, will one day fade away.

*Oba can be reached via e-mail:abdulwahaboba@gmail.com

APC Crisis: Beginning of the end 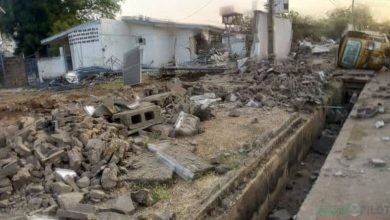 The demolition of Ile Arugbo

Electoral malpractices not part of Democracy