By Mumini AbdulKareem
Just a week after the demise of the Olupo of Ajase-Ipo, Oba Sikiru Atanda Woleola II, successful, the battle for who replace him has already commenced in earnest, National Pilot reliably gathered last night.
The first class traditional ruler died at his country home in Ajase-Ipo on Sunday, February 21, after a brief illness. His remains has since been interred at Ajasa-Ipo according to Islamic injunctions.
His Fidau will come up tomorrow in the community which is expected to attract top dignitaries from the government, religious, political and traditional circles from within and outside the state.
However, this medium gathered that more than five candidates have already indicted interest to succeed the late monarch who was the 15th Olupo from the Woleola ruling clan, one of the three ruling houses to the throne.
The other two ruling houses are Ariyibi and Alebiosu of Ajase-Ipo, Irepodun Local Government.
Top contenders for the stool this medium learnt last night were 41 years old Lagos based legal practitioner, ALHAJI ISMAIL BOLAJI MUHAMMED ATOLOYE ALEBIOSU, who sources described as a strong favorite who is very close to the people based on his community and humanitarian activities to advance the cause of his people.
The University of Ilorin law graduate is multiple winner of many academic awards of excellence as a student and legal practitioner and member of the Chartered Institute of Arbitrators, United Kingdom.
Others contenders are Prince Bode Ariyibi, a lecturer in one of the tertiary institutions in Lagos, California based correctional service worker, Nasiru Alebiosu, a Fabricator Engineer, Murtala Alabiosu, another American based businessman, Taiye Saliu Alebious and a Lagos Importer, Mukiala Olabanji.
However, it was gathered that the number is expected to swell as more contenders will emerge in the coming weeks leading to the appointment.
A source who spoke on the issue said there is going to be a meeting after the Monday burial of the Olupo comprising all the sons and daughters of the three ruling houses at the palace where the stool will be officially declared open for interested candidates.
“The numbers is expected to swell as many of those also interested are only bidding their time before making official declaration because they don’t want to jump the protocols”, the source added.
It was gathered that a new twist has been added to the tussle for the thrown this time around with the introduction of forms to be collected with the payment of N200,000 by the kingmakers.
“So far, some have collected the forms and others will collect Sunday. However, we don’t know the reason why the kingmakers are doing this now introducing the collection of forms with N200,000. This has never happened before in the history of the tussle for the throne”, another source added.
The Olupo reportedly ascended the throne in 2009 and died after 12 years of peaceful reign.
Until his demise, Oba Woleola was the chairman of the Igbomina traditional council in Kwara south. 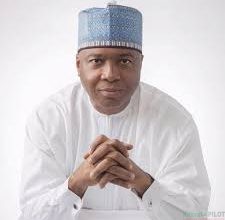