Enyimba head coach Finidi George has hailed his side’s away win against Senegalese club Dimbars FC in the first leg of their CAF Confederation Cup first round tie on Saturday.
The Peoples Elephant defeated their hosts 1-0 with substitute scoring the winning goal from the spot three minutes from time.
Finidi, who was gracious in victory, expressied his admiration for the Diambars team.
“Personally I am happy that we played this way. We knew this team (Diambars) is a very good team technically, they pass the ball very well but at the same time we kept our composure, we kept our formation and then tried to hold them so that they cannot score an easy goal,” the gaffer told the club’s website.
“In the second half we still played that way trying to contain them and the tempo dropped and that helped us as well to pass the ball a little bit more in the middle and gave us that opportunity with the few changes we made.
“We knew we cannot match them because I think they’ve started their league already, they’ve played couple of games, real competitive games and they have that match rhythm so we knew if we could play to our formation, not give them that space, which I think they had in the first twenty or twenty-five minutes that they dominate. After that the tempo dropped a little bit and that permitted us to play our football a little bit.
“We saw that in the second half most players were tired after sixty minutes and we made some changes and brought in some fresh legs which really helped to give us that penalty.” 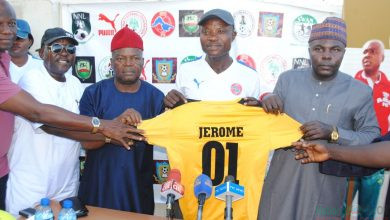 Osimhen’s eye came out of the socket – Surgeon