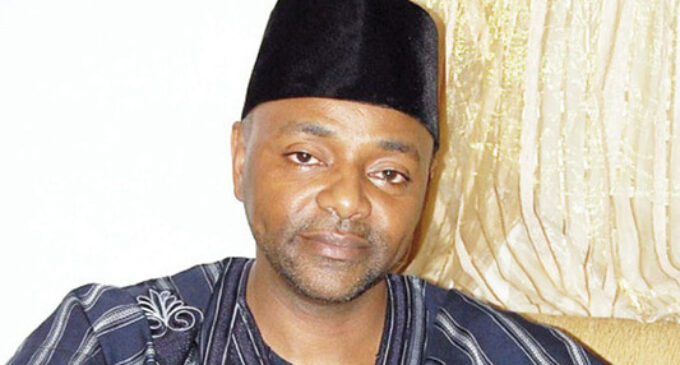 “Mohammed Sani” originally had 50 percent in the company, with “Kweku Amafegha”; a pseudonym for Dan Etete, who was minister of petroleum at the time, owning 30 percent; and Wabi Hassan, the wife of Hassan Adamu, Nigeria’s then-ambassador to the US, was credited with 20 percent.

Mohammed’s father, Sani Abacha, was the Nigerian head of state at the time Malabu got the oil block.

President Olusegun Obasanjo’s administration revoked the allocation in 2001 but, after a legal tussle, agreed to return it to Malabu.

But this was not effected until 2010, after which Malabu sold the block to Shell and Eni for a total of $1.1 billion — with the multinational oil companies also paying a signature bonus of $210 million to the federal government.

However, Abacha’s oldest surviving son has told the court that while he was in detention between 1999 and 2002, his partners in Malabu expunged his name from the company’s registration documents.

He said that in 2010, he petitioned the EFCC as well as Mohammed Adoke, then attorney-general of the federation, over the development and warned Shell and Eni not to buy OPL 245 from Malabu.

Adoke, who is the first defendant, previously alleged that the Abacha family was using the EFCC to persecute him because they believed he did not allow them to profit from the OPL 245 sale.

EFCC denied the allegation at the time but has now presented Abacha as the prosecution witness in the case of alleged fraud filed against Adoke, the former AGF, Aliyu Abubakar, a businessman, and Rasky Gbinigie, company secretary of Malabu.

WHAT DID ABACHA SAY IN COURT?

At the hearing on Thursday, Bala Sanga, the EFCC prosecutor, presented Abacha as the only witness he brought to the court before Justice Abubakar Kutigi.

Sanga: What do you do for a living?

Abacha: I am a businessman

Sanga: You know the defendants in the suit

Sanga: Can you inform to the court the capacity and circumstances you know them?

Abacha: 1st defendant (Adoke) was company secretary of Kabo Airlines. He is former attorney-general of the federation. I paid him a courtesy visit when he became AGF and informed him of my problems with OPL 245 and Malabu Oil and Gas. He asked me to officially write him and indicate all the issues and problems I had. I did and submitted in 2010.

Sanga: What’s the basis of your appearing in court?

Sanga: When did you become aware of irregularities in company documents?

Abacha: After the death of my father (in 1998), I was handed some documents and I was made aware of alterations and changes in Malabu. Subsequently, I gave a power of attorney to late AVM Mukhtar Babagana to kindly oversee the affairs of Malabu. He travelled to London to see Chief Dan Etete who had fled the country then. It became impossible for him to see him (Etete). Subsequently, I sought the help of my lawyer, Abubakar Malami (the current attorney-general of the federation), to go to CAC and conduct a search. After sometime, with no luck and response, I got R. O Atabo to conduct a search at CAC and it was discovered that several alterations had already been done in June 1998 and November 1998 where my name was totally removed and other changes in 2000 where shares were altered and converted and my name no longer appeared. That was when the other company, Petros Energy Limited, was introduced which is controlled by Chief Oyewole Fasawe.

Sanga: Did you at anytime authorise or attend meetings to change the name?

Sanga: Kindly tell the court what steps you took after discovering the alterations.

Abacha: First step was to file a suit at FHC, Abuja, seeking the court to assert my ownership of the 10 million shares in Malabu. Then I asked my lawyers in London to write Shell and ENI Agip cautioning them against going entering any agreement, JV or of sorts, with Malabu and I intimated them of being a director and shareholder. It was a caveat to Shell and Agip. I got R. O. Atabo to write a letter to the Netherlands and Italian embassy, the home embassies of Shell and Agip, to pass the information that the oil companies should not participate in any relationship with Malabu. Finally, I asked Atabo to publish in two newspapers cautioning anyone and forbidding anyone from entering into any negotiations, event or partnership with Malabu. Unfortunately, all fell on deaf ears.

Sanga: You told Atabo to conduct search. Can you inform the court on any specifics of these alterations?

Abacha: The lawyer that falsified [the documents] went to CAC to make changes in Form Co2. I got Atabo to write a petition which was duly received and CAC responded, guiding and directing that they had forwarded a letter to the EFCC seeking them to investigate and prosecute the issues raised.

Sanga: Are you aware of any details of the disposal of OPL 245 and the proceeds therefore that you may want to tell the court?

Abacha: While my case was pending in FHC, Chief Dan Etete and his cohorts had sold Malabu’s oil block to Shell and ENI Agip. Unfortunately, the proceeds were paid without my knowledge, approval and consent as a shareholder.

Erokoro: You told the court that you bear two names. Please, repeat the names.

Erokoro: What is the name on your international passport.

Erokoro: In what year did it change to Mohammed Sani Abacha

Erokoro: Can you show this court a copy of any old passport that has Mohammed Sani?

Abacha: I don’t have a copy but can make available to the court.

Erokoro: Do you have any other official documents nearing Mohammed Sani apart from your international passport?

Abacha: I have many.

Erokoro: Please, show them to the court.

Erokoro: Do you have a driver’s licence with you?

Abacha: I don’t have a driver’s licence.

Erokoro: When you went to school, did you hear the name Mohammed Sani?

Erokoro: Do you have anything to show that you were referred to as Mohammed Sani?

Abacha: I don’t have

Erokoro: At the time of your birth, your surname was Sani?

Erokoro: Your have brothers and sisters?

Erokoro: What are their surnames?

Erokoro: So, you are the only one who did not carry his name at birth?

Abacha: Not me alone, my late brother too.

Erokoro: By late, you mean Ibrahim

Erokoro: I live in Ibrahim Abacha Estate. It’s not true that he didn’t bear your father’s name.

Abacha: It’s the government that named the estate and not him.

Erokoro: So the government knew him as Ibrahim Abacha… You are the original shareholder of Malabu and so you have copies of the original incorporation documents. Please, show them to the court.

Abacha: They are all in the custody of the EFCC.

Erokoro: Did you keep any copy for yourself?

Erokoro: Did you ever hold board meetings

Abacha: There was never a board meeting.

Erokoro: And all the original shareholder had pseudonyms?

Gadzama: Ahmed Mohammed Sani is the name you signed… You told the court that you sent a letter to the 1st defendant but not copied to the 5th defendant (Eni).

Gadzama: You also told the court that you wrote letters to the Dutch and Italian embassy. Were they copied to the 5th defendant?

Gadzama: Can you tell us the newspapers where this caveat were published

Abacha: If I remember well, Leadership and BusinessDay newspaper if my memory serves me right

Gadzama: Are you aware of the court proceedings in Milan

Gadzama: I put it to you that the case in Milan dismissed charges and this was followed by the high court and the court of appeal this week. Are you aware of the case in England?

Abacha: I am aware and I don’t know how it ended

Gadzama: The proceedings in England ended in favour of the 5th Defendant. Are you aware of the investigation carried out in the US and how it ended?

Abacha: I am not and I don’t know how it ended

Gadzama: The verdict came out and the 5th defendant was not indicted. Judgment was delivered on 17th July 2013. It shows Dan Etete has shares in Malabu

Abacha: Dan Etete has no shares in Malabu

Gadzama: Dan Etete had shares through the pseudonym name Amafegha, that’s true. At commencement, they were four original shareholders

Abacha: No, that was part of the alterations

Gadzama: But you signed the forms. You are aware of the findings of the EFCC that Etete has shares

Abacha: No, I am not aware

Gadzama: For the purpose of asserting your shares, you filed suit FHC/ABJ/59/2010 to assert your shares and Malabu was a defendant

Abacha: I can’t remember. Maybe if I see the documents.

Gadzama: The case was withdrawn and dismissed on 20/9/2012. Everything you told the court today you also told the EFCC in writing

Abacha: There might be variants. There is a difference when you are writing a petition and when you are answering a question. The thought process is different.

Gadzama: Is it possible that some things that you said today are not in your statement to EFCC? You referred to the letters and caveat, what name did you use in all these?

After the cross examination by other defence lawyers, the judge adjourned till January 26, 2022 for further hearing.